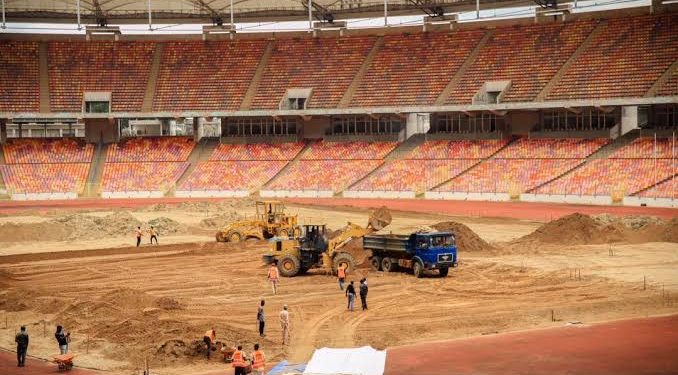 Minister of Youth and Sports Development, Mr Sunday Dare, has assured that the National Stadium Surulere, Lagos will soon be completed  to host sporting activities.

Speaking yesterday when he visited the Sports City, the minister said he was excited by the scoreboard that has started functioning and the regrassed pitch, adding that other facilities, like tartan tracks, VIP lounge and spectators stands, among others, will soon be completed.

He said: “This facility was abandoned for many years. The stadium, unlike the Abuja Stadium, had zero maintenance funds for almost 17 years, but we got Chief Adebutu Kesington (Baba Ijebu) to get it back to life. The time needed to get it back to life is much longer than what the eyes can see.

“The underbelly of the pitch had to be excavated and new sprinklers installed because the old ones were either stolen or rotten. The 10 lane tartan tracks is starting from the scratch because we listened to expert advise, the scoreboard took longer time to dismantle because it had become obsolete and had to be replaced with a new one.

“The decay at the complex has been  on for too long. The person funding the work insisted on the right quality and the international standard before work started.

“It took me a while to come here, but my coming is a validation of the fact that I am impressed with the level of work that has been done. I hope that very soon we can host events here once we get the place functional.

“We are going to clear the debris, the grass is being properly maintained and the tracks will soon be laid. We are good to go.”

The minister revealed that he set up a task force to restore the stadium’s master plan and eject illegal occupants, as well as remove illegal  structures from the facility, adding, “When we took down more than 100 illegal shops, we received bashing from the press and some people that lost their source of livelihood.

“This is a sports facility and not a market place, which holds a lot of fond memories. We have identified a parcel of land where we can build about 150 lockup shops, a bank and fire service station to accommodate those that were evicted.

“We are awaiting  Mr. President’s anticipatory approval… we are working with the Ministry of Works, BPE and other government agencies. Once approval  is given, work will start in earnest.”

He explained that the control room would soon start functioning to enable the activation of the water sprinkler, scoreboard and the lighting systems.

“By April, we hope the facility can host a football  match, athletics meet that will bring the fans back to the stands.

“With the COVID restrictions on the number of fans at sports events, we can get them back in few numbers,” he enthused.