Tragedy was averted, yesterday, as the Lagos State Emergency Management Agency (LASEMA) rescued four persons trapped in a Toyota Camry car after a 40ft container fell on it at the Barracks area of the state.

According to Nosa Okunbor, the spokesperson of the agency, two males and two females were rescued.

The accident, which happened around 6:35 p.m. on Sunday, involved a grey Toyota Camry car with registration number KRD-822FX and a 40ft containerized truck which fell sideways at Abalti Barracks.

Mr Okunbor said the containerized truck developed a mechanical error which led to the accident.

According to the situation report from the Director-General of LASEMA, Olufemi Oke-Osanyintolu, “upon arrival at the scene of the incident, a 40ft containerized truck fell sideways on a grey Toyota car.

Mr Okunbor confirmed that the other two persons were later rescued with the aid of the agency’s heavy duty equipment Forklift, alongside efforts of officers from LASTMA, Nigeria Army, Nigeria Police Force and FRSC.

“The third and fourth accident victims have all been successfully recovered from inside the car alive and are presently being given Pre-Hospital care inside the ambulance,” the LASEMA boss said.

Also reacting to the incident, the Lagos Sector Commander of the FRSC, Olusegun Ogungbemide, warned owners of articulated vehicles that are not maintaining minimum safety standards to keep such vehicles off the road for the sake of innocent motoring public or face the wrath of the law.

Mr Ogungbemide said the crash would have been more devastating if not that the container was properly twist locked.

He commended the rescue agencies for their swift response that assisted in rescuing all the trapped victims and the availability of rescue equipment which made the operation seamless.

As at 9:35 p.m., Mr Okunbor said the accidented containerized truck has been recovered off the road with the aid of the Agency’s heavy duty equipment Forklift and placed on a layby, thereby restoring normalcy on the road.

“The car was towed to Area C police station with the light tow truck. Operation concluded,” the statement read. 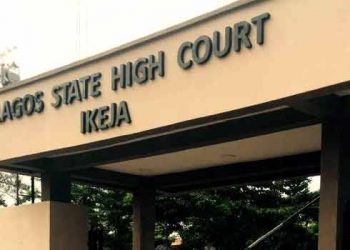