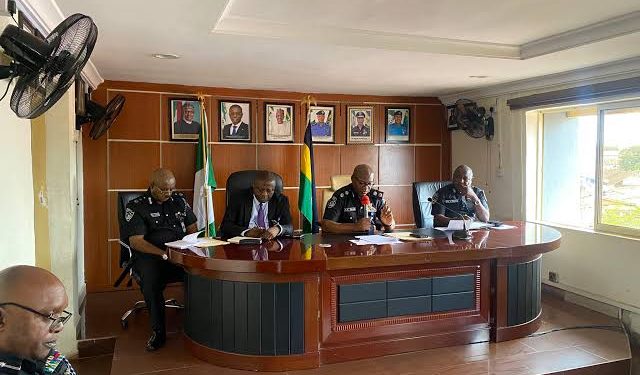 The Lagos State Commissioner of Police, Abiodun Alabi, is holding a security meeting with all Area, Squadron and Tactical Commanders in the state.

The Public Relations Officer of the Lagos State Police Command, Benjamin Hundeyin, made this known via a tweet on Monday.

Sharing photos from the meeting, Hundeyin noted that the security and safety of all Lagos State residents remained a top priority for the police.

Hundeyin tweeted, “ONGOING: CP Abiodun Alabi, fdc meeting with all Area, Squadron and Tactical Commanders in Lagos State. The security and safety of all residents of Lagos State remain a top priority.

“We call on Lagosians to remain vigilant and report anything suspicious to security agencies.”

Alabi had on Sunday assured Lagos residents of adequate security following reports which suggested that the state is on the radar of some persons planning attacks across the country.

He said, “The command is also working closely with sister security agencies to ensure that no person or group of persons succeeds in destabilising the peace and serenity enjoyed by the good people of Lagos State.

“I want to use this medium to allay the fears of Lagosians and assure them that all human, material, and operational resources have been fully and optimally deployed across the length and breadth of the state, especially at border towns, towards ensuring there is absolutely no breach of the peace.”

Hundeyin, during a Twitter Space webinar, on Saturday, responded to questions from The PUNCH on reports of a possible planned attack on Lagos by terrorists and the readiness of the police, where he noted that the police were also getting intelligence reports.

The PPRO had said, “We are working seriously with other security agencies. Many times that I am with the Commissioner of Police, Abiodun Alabi, the Department of State Services keeps sending intelligence reports to us.”

Doctors Urge FG To Beef Up Security In Abuja