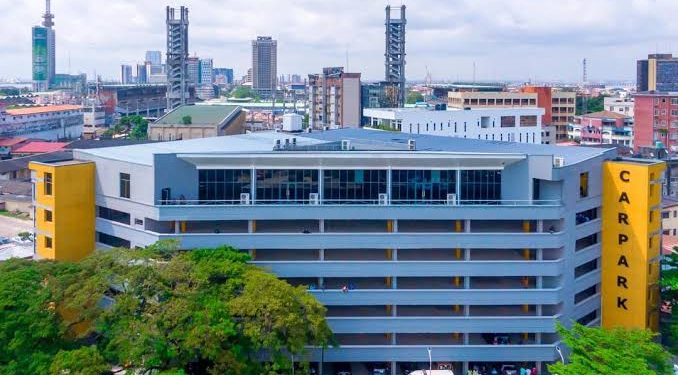 The governor said the facility conceived in 2013 will service the renovated Onikan stadium and other primary social centres, such as Island Club, Yoruba Tennis Club, Lagos Lawn Tennis Club, King George V Park, Police Command Recreational Centre as well as other facilities in the neighbourhood and fix parking requirements generated by these centres.

Sanwo-Olu noted that the beautiful edifice also has spaces designed for a private club house with other complementary facilities, which will also help to smoothen vehicular movement.

Some of its special features also include but not limited to an automated ticketing system, water treatment plant, fire alarm systems, CCTV for proper monitoring of vehicles parked, data network and a 24/7 power supply.

He noted that Lagos Island could be modestly referenced as one of the largest commercial corridors in the state, leading to corresponding increase in commuting, especially, high volume of vehicular traffic including social activities, culminating in traffic gridlock and pressure along this corridor.

According to him, aside going a long way to ensure that parking activities are conducted and coordinated in safe and comfortable environment, the facility, will also help to ease the age long parking problem along this axis, as well as ensuring free flow of traffic as there will no longer be disruption to vehicular movement in the area, which has been perennially associated with indiscriminate parking on the streets.

He said: “The facility being commissioned today has the capacity to accommodate 384 cars on five suspended floors, with offices for tickets and restrooms on each floor.

The 6th floor of the facility is a mixed-use multipurpose space consisting of two banquet halls, which can be used as an auditorium sitting almost 1000 people and for ceremonial use to accommodate over 600 guests.

He continued by saying, “Lagos has the largest number of cars on the street in the country. As a Government, our administration would continue to provide supporting infrastructure and leverage data to enhance capacity of small and medium scale enterprises.

“Undoubtedly this infrastructure will bring to Lagos Island axis great improvements, it will serve the purpose of reducing indiscriminate parking and greatly resolve traffic gridlocks and that is moving towards the Smart Megacity of our dream; a Lagos where no one is slowed down and where we all succeed together.

“This multi-level car park project is critical to enhancing the ability of businesses to effectively operate and will be supported by efficient traffic management and an Automated Fare Collection Service (AFCS) – that will offer an operable payment solution to prevent traffic dovetail into the main road.”

Earlier, the special adviser on works and infrastructure, Mrs. Aramide Adeyoye, an engineer, said the facility was significantly important because of its large size parking capacity, income generation potential and its location strategically within the heart of Onikan.

She said its judicious use will no doubt help absorb vehicles that would have otherwise parked on the roadside and other illegal parking places along the corridor with its attendant negative impact on traffic flow.