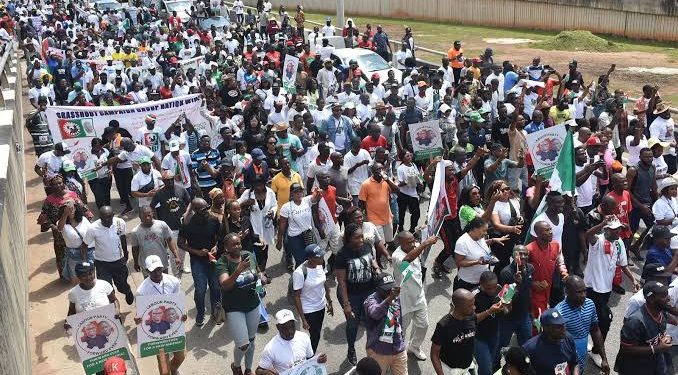 Nigerians have gathered in different parts of Lagos as they prepare to rally for the 4 million march in demonstration of their support for the presidential candidate of the Labour Party, Peter Obi.

As seen by different videos and pictures posted by Obi’s supporters (Obidient) on social media, the name of Obi is being chanted as the Nigerians advocate good governance.

Defying the early morning rain in some parts of the state, Obidients are seen canvassing for their favourite on social media as they celebrate Nigeria’s independence in customised wears promoting Obi.

What they are saying

@firstladyship said, “Lagos Rally on Independence Day is symbolic. Our Peaceful Political Rallies have come of age. Right now? Oil Theft & ASUU Strike is on the ballot. Banditry, UGM and Kidnapping are on the ballot. The National Grid & Twerking Naira are on that ballot. LAGOS, pls make us proud.”

@Ristpreneur wrote, “For a very long time, Nigerians found no reason to celebrate Independence day. It has always been a day when we reflect on our failures as a result of bad leadership. But today, we are wishing ourselves HAPPY INDEPENDENCE. Peter Obi restored our hope for Nigeria.”

@adekola_twelve said, “I’m a Lagosian and I’m going for the #Lagos Rally for My President, PeterObi. The meeting point for Lekki Obidients is Marwa (2nd Roundabout). On this independence day, we refuse to be held down by fear or intimidation from the oppressors! We meuve!”

Justice Daniel Osiagor of the Federal High Court, Lagos division has ordered the Labour Party and the supporters of Peter Obi not to converge at the Lekki Toll Gate for the #Obidatti23 Forward Ever rally scheduled to take place on October 1 in Lagos.