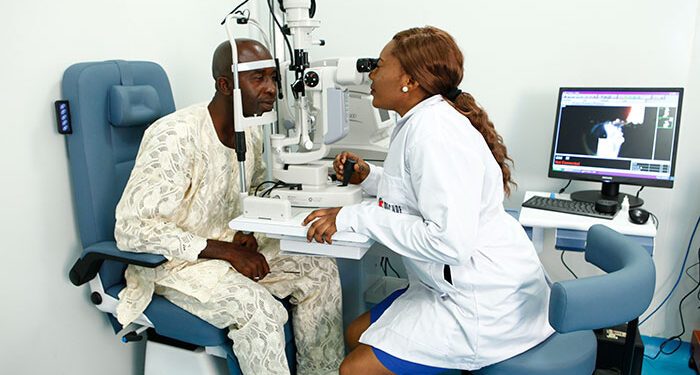 The Lagos State Government has once again tasked citizens to go for periodic but regular eye checks and ensure adequate eyecare in order to prevent an irreversible and avoidable blindness.

The Commissioner for Health, Prof. Akin Abayomi, stated this on Thursday at a public lecture organised by the Ministries of Health and Education to commemorate World Sight Day 2020 in Lagos.

He noted that regular eye check will aid early detection, correction or management of any vision impairment that could lead to avoidable blindness.

Speaking on efforts being made by the State Government to increase citizens’ access to eye health care at the public lecture, the commissioner said it is rather unfortunate that many people are not privileged to have access to eye specialists who have the required expertise to diagnose their optical needs.

Abayomi disclosed that there are over a billion people in the world that have visual impairment because they do not have access to corrective glasses, adding that 75 percent of the visually impaired population has vision impairment because it was not prevented.

Abayomi explained that the mission of the State Government, through the Ministry of Health, is to explore platforms provided by activities such as the World Sight Day to bring to the attention of citizens issues of vision impairment, avoidable blindness and eye care, adding that it is the responsibility of the Ministry to make information on blindness prevention available to the populace whilst also making it possible for many residents to have access to eye checks, care and treatment, including providing corrective eyeglasses.

He averred that there are many disorders that lead to vision impairment or blindness, citing sugar diabetes, sickle cell and glaucoma as some of the conditions that may prevent an individual’s ability to see clearly and are often difficult to reverse if not addressed early.

Earlier in his remarks, the Permanent Secretary, Ministry of Health, Dr. Olusegun Ogboye, stated that it is not an accident that this year’s world sight day focused on common causes and prevention of visual impairment among school children because of the importance of early detection in the correction and management of eye conditions.

Ogboye submitted that most students, who are tagged dullards, are actually smart and intelligent but perform poorly because they suffer from visual impairments which their parents or teachers are not aware of.

The Permanent Secretary, therefore, enjoined parents, caregivers and teachers to pay attention to the eye health of children to identify early and seek help against any visual impairment that may militate against effective learning or which may lead to blindness.

The Guest Speaker at the event and Consultant Paediatrics Ophthalmologist, Dr. Modupe Idris, explained various causes of blindness among students and ways of preventing them.

Idris, however, warned students to avoid playing with sharp objects around the eyes and try as much as possible to resolve problems without a fight as a blow on the eye can lead to permanent damage to the eyes.

She urged teachers to take note of their students so as to quickly identify the visually impaired ones, imploring them to be very careful in giving corporal punishment to students as the cane can accidentally hit the eyes.

The Director, Medical Administration and Training in the Ministry, Dr. Funmilayo Shokunbi stated that government, parents and caregivers have roles to play in preventing visual impairment in children, stressing that the partnership of all in the prevention of blindness is nothing short of communal good, which gives hope to sight.