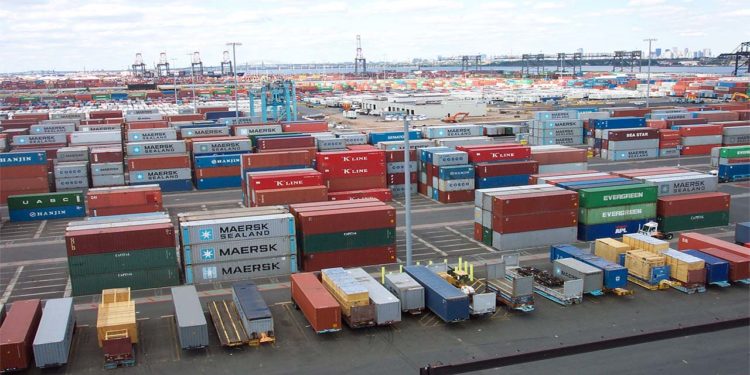 Following the pandemic, which halted activities in the state and with the gradual easing of lockdown, the Lagos and Tin-Can Island Ports now have about 1000 containers load of raw materials awaiting export.

This has further affected the number of days each vessels waiting to be called in to berth at the different terminals, as it has now increased to 50 days.

Also, containers loaded with raw materials for export have been trapped along the port access roads due to the chaotic traffic situation caused by trucks carrying export cargoes.

The Executive Secretary of the Nigerian Shippers’ Council, Barr. Hassan Bello, has arrived at an agreement between AMP Terminal and the Nigerian Railway Corporation (NRC) on the evacuation of cargoes by rail.

The Nigerian Ports Authority (NPA) has also licensed more barge operators for the evacuation of imports by waterways.

In a meeting between NRC and APM Terminals, the Director of Regulators Service of the council, Ijeoma Ezedinma, said that going forward, only export cargoes would be allowed into the ports by road. Imports are now to be evacuates either by rail or barges.

“The ultimate aim is to ensure that imported consignments are moved by rail or barges while raw materials meant for export that trapped on the road are to be allowed in by road.

“The Council will ensure strict monitoring of the process of the newly midwifed Standard Operating Procedure (SOP) to ensure efficiency and sustainability of the entire process. At the end, only export cargoes would be allowed to access the ports by road. With this new arrangement, access roads to the ports would be traffic free. This will bring about reduction in the cost of doing business at the ports because of the economics of demand and supply.

“We are not supposed to have containers stacked inside the ports. The ports have been converted into warehouses because most owners of these consignments are not coming forward. During the lockdown, a lot of warehouses were locked. These accounts for why importers are reluctant to come forward” he added.

While District Manager of NRC, Lagos, Engr. Jerry Oche said that the corporation would be starting off with two trips per day, adding that even though the Corporation has the capacity to do four trips per day. A train made up off 19 wagons can carry on each wagon one 40ft container while each can carry two 20ft containers, that is 38 trucks off the road per day.