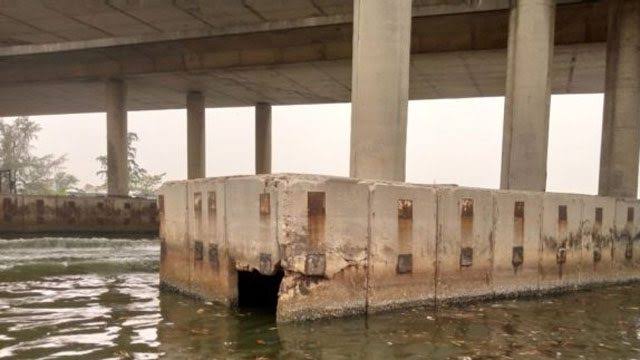 Residents of Tolu community, Olodi Apapa, Lagos State, have raised an alarm over the constant dredging of the Port Novo Creek opposite Tin Can Island Port, saying the action can lead to the collapse of the Coconut Bridge linking the seaport.

The host community lamented that the dredging activities would also lead to flooding, which might affect the revenue drive of the government, the Nigeria Customs Service (NCS) operations and sporting activities.

According to them, if the activities continue, there are indications that the popular Tolu Complex, warehousing 12 secondary schools and the Maracana Stadium, which is under construction, will be swept away by the flood.

The community leaders queried the government over the approval of the dredging exercise, which has been ongoing since last year.

They expressed worry that the situation, if not discontinued by relevant authorities, would endanger the lives of residents, mostly during the rainy season.

Oba of Tolu Community, Prince Ayade Abayomi, noted that investigations were ongoing to know if the contractor of the dredging site had the requisite permits to execute the project.

“We are aware that private companies are involved in the sand filling across the coastal area, but they should go and buy sand for their project and not use the water as their source because of the looming danger.

“Any moment from now, we are going to involve both the local and state governments on this issue because it is a menace to our society,” Abayomi said.

According to him, a meeting was held but did not yield any positive result to stop the dredging activities.

A native of Ibeshe and Awori, Ogunlana Jimoh, called on the government to halt the dredging exercise along the waterfront.

Ogunlana threatened to engage a lawyer to halt all activities if engagement with relevant government authorities fails.

Ogunlana, who is a ‘Balogun’ in the community, recalled that authorities of the council attempted to dredge from the waterfront during the construction of the Maracana Stadium last year, but were halted due to the danger inherent.

A transporter and stalwart of the Nigerian Association of Road Transport Owners (NARTO), Inuwa Abdullahi, said urgent steps must be taken by the government to stop the contractor from further damages on the Coconut bridge and the community.

He recalled how millions of naira was expended to repair the bridge by the government, thus saying, “If the bridge should collapse anytime from now because of the dredging, then the nation’s economy will be in jeopardy knowing fully well that coconut bridge is connected to the two major ports in Nigeria.”

Reacting to the dredging activities, the contractor in charge, Ben Osade, when contacted via the telephone, said the owners of the site might have obtained the necessary documents.

The contractor, who declined to reveal the site owners and that of his company, maintained that the site needs constant channelisation and would have no ripple effect on the bridge.

He explained that it is impossible to commence the dredging activities without consultation by the relevant stakeholders, mostly the host communities.

According to him, properties and equipment at the site were allegedly vandalised by miscreants, which has caused setbacks for the ongoing project.