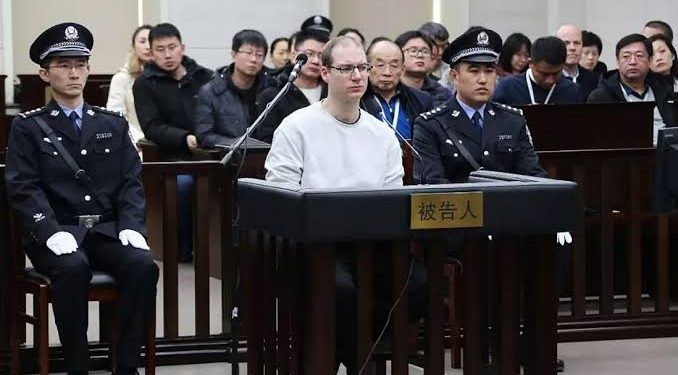 The court rejects the Canadian drug convict’s appeal in what could be an effort to increase pressure on Canada to release a detained Huawei executive. But China has dismissed a suggestion that the cases are linked.

The Canadian ambassador to China has condemned a court’s ruling to uphold the death sentence verdict for a Canadian convicted of drug smuggling.

Robert Schellenberg was arrested in 2014 and sentenced to 15 years in prison in November 2018 but then abruptly resentenced to death in the city of Dalian in January 2019.

Schellenberg was convicted of smuggling 222kg (448lbs) of methamphetamine, according to the court.

This decision to reject his appeal came while the Chinese government was trying to pressure Canada to release the chief financial officer of telecoms giant Huawei.

Meng Wanzhou was detained at Vancouver Airport in December 2018 on US charges related to possible dealings with Iran.

Meng, who has said she is innocent, has been fighting her extradition from under house arrest in Vancouver.

It is not a coincidence that these are happening right now, while the case is going on in Vancouver,” Mr Barton said, referring to Schellenberg’s case and that of another Canadian, Michael Spavor.

The Higher People’s Court of Liaoning Province rejected Schellenberg’s appeal, which it heard in May 2020, and said in a statement on Tuesday that the sentence was appropriate and the lower court’s procedures legal.

It sent the case to the Chinese supreme court for review, as is required by law before any death sentences can be carried out.

Businessman Spavor was detained in China days after Meng’s arrest in Vancouver.

He was charged with espionage in June last year and went to trial in March.

Mr Barton said a court in the northeastern city of Dandong, on a river bordering North Korea, is expected to announce a verdict on Spavor on Wednesday.

China has rejected the suggestion the Canadians’ cases are linked to Meng’s case in Canada though China has warned of unspecified consequences unless Meng was released.

Chinese courts have a conviction rate of more than 99%.