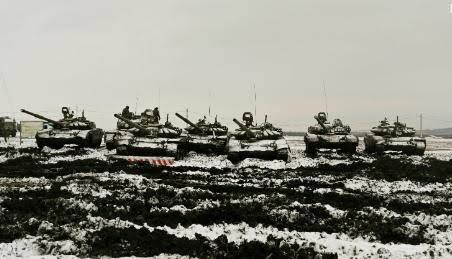 New satellite imagery obtained by CNN shows that a large base which held Russian tanks, artillery and other armor near the Ukrainian border has been largely emptied, with the equipment apparently being moved much closer to the frontier in recent days.

The base is at Yelnya, southeast of the city of Smolensk and some 160 miles from the Ukrainian border. Large amounts of weaponry were moved there late in 2021 — including some 700 tanks, infantry fighting vehicles and ballistic missile launchers.

Much of that equipment is now gone, according to radar satellite imagery acquired on February 6. Cloud cover had prevented photographic imagery of the site for several days previously. The images show the tracks of departing vehicles.

Stephen Wood, senior director at satellite imagery company Maxar, told CNN: “It looks to me like a considerable amount of the vehicles [tanks, self-propelled artillery and other support vehicles] have departed from the northeastern vehicle park; additional armored vehicles departed from the more central vehicle park.”

Konrad Muzyka, an expert in tracking military movements with Rochan Consulting, says what has happened at Yelnya is one of several “important changes in Russian force compositions and their locations.”

He told CNN: “We are entering the new stage of the build-up where we are seeing pre-positioned units being manned with additional personnel and that equipment is being moved probably to staging areas.”

Social media videos shot in the last few days show some of that equipment on trains and roads much further south in the Bryansk region, which is close to Ukraine. The armor and vehicles are identifiably from the same units that had pre-positioned at Yelnya

“There are now multiple indicators suggesting troops have begun deploying to forward camps to join up with their prepositioned equipment,” writes Thomas Bullock, an analyst at Janes. “Video posted on social media indicates some troops from Siberia, whose equipment has already been moved to sites in Smolensk and Bryansk, are in the process of deploying.”

A US intelligence document dated December 3, 2021 included satellite imagery showing that the site at Yelnya was empty in June — but by November was home to five Battalion Tactical Groups, each of which contains about 1,000 troops and supporting elements. Much of the equipment belongs to the 41st Combined Arms Army, which is normally based in Russia’s Central Military District and has its headquarters in Novosibirsk in Siberia.

Muzyka says there are substantial Russian movements elsewhere. “We are seeing a massive influx of vehicles and personnel in Kursk,” he tweeted Sunday. Kursk is some 70 miles (100 kilometers) from the border with Ukraine.

Phillip Karber of the Potomac Foundation in Washington, who has also studied Russian troop movements in detail, told CNN: “Russia’s strongest offensive formation — the First Guards Tank Army, which is normally stationed in the Moscow area — has moved south 400 kilometers and is assembling in the optimum area for a rapid armored offensive on the Khursk-Kyiv invasion route.

On Sunday, US national security adviser Jake Sullivan told ABC News: “We believe that there is a very distinct possibility that Vladimir Putin will order an attack on Ukraine. It could take a number of different forms. It could happen as soon as tomorrow or it could take some weeks yet.”

Separately US officials told CNN at the weekend that Russian President Vladimir Putin has now assembled 70% of the military personnel and weapons on Ukraine’s borders he would need for a full-scale invasion of the country.

This includes a growing force in southern Belarus.
The Kremlin has repeatedly denied any plans for a military offensive against Ukraine.