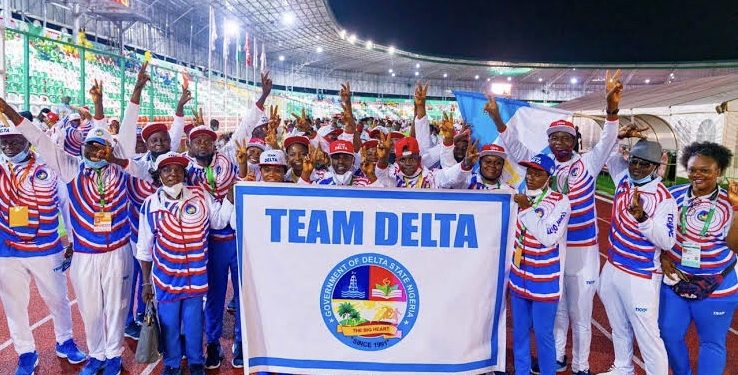 Team Delta has won five gold medals in the cycling event out of the seven events contested for so far at ongoing National Sports Festival holding in Asaba, Delta State.

The Commissioner for Information, and Chairman Sub-committee, Mr Charles Aniagwu, said the move shows that the state is not willing to relinquish its number one position in sports.

Aniagwu, who named the state as “Home of Sports,” said Team Delta is far away from other states even as the Game is still young, adding that as it’s now, the gold medals are coming in numbers.

In the 500m female Sprint, Delta’s leading cyclist, Ukpeseraya, won the gold; Deborah Alase of River picked the silver while Tawakalt Yekeen got the bronze.

Isa continued his winning streak which has put team Edo second behind team Delta in the cycling event when he beat team Delta’s Azeez Mutiu in the men’s 200m sprint.

Mutiu, who was leading in the final had a broken chain midway into the race to allow Momoh overtake him and clinched his second gold medal of the day.

Meanwhile, to young Victoria Enwemanya, making her debut in the National Sports Festival and winning gold for Delta is a dream come true. She said her feat would further boost her career in the sports.

Patricia John, Enwemanya’s coach, was excited even though she settled for the silver medal. She then expressed delight in her athletes doing well.

“Well, I am so excited she won, it shows that I am doing a very good job. We are looking forward to winning more gold medals,” she said, as Ogun State athlete won the bronze.

Speaking on her feat over coach, Enwemanya said: “I am very excited by the gold medal and I am looking forward to winning more gold medals at the festival,” this is how Enwemanya of Team Delta, celebrated her gold when she beat her coach to win gold in the 501 single category of the darts event at ongoing sports festival in Asaba, Delta State.

Competition continues today in the darts event where 18 gold medals are at stake in the men and women categories.