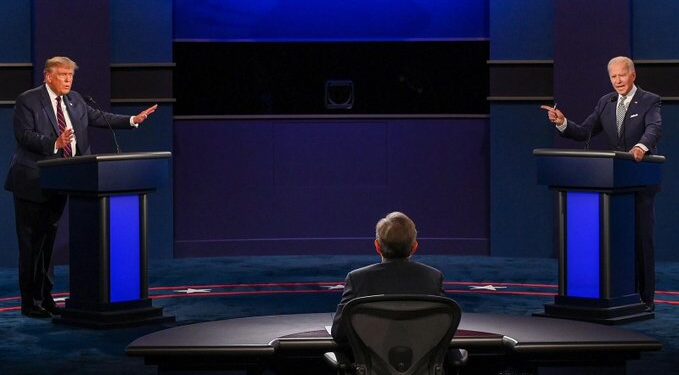 President Donald Trump and his challenger Joe Biden have fiercely clashed in one of the most chaotic and rancorous White House debates in years.

Amid angry shouting and name calling, the two fought over the pandemic, white supremacy and the economy during the 90-minute forum in Cleveland, Ohio.

Mr Biden called the president a “clown” and told him to “shut up”. Mr Trump brought up drug use by his rival’s son.

But with 35 days until election day, surveys from several important states show a closer contest.

The debate focused on six topics in 15-minute segments – the candidates’ records, the Supreme Court, the pandemic, race, election integrity and the economy.

In a vitriolic back and forth punctuated by insults, Mr Biden, 77, told Mr Trump, 74: “You’re the worst president America has ever had.”

How did they clash on race and white supremacy?

In one of the most talked about exchanges of the night, the president was asked by the moderator if he was prepared to condemn white supremacists.

He initially said he would but when asked to denounce the far-right Proud Boys group by name, he sidestepped.

Mr Trump said: “Proud Boys, stand back and stand by, but I’ll tell you what, somebody’s got to do something about antifa and the left.”

Earlier, Mr Biden said: “This is a president who has used everything as a dog whistle to try to generate racist hatred, racist division.”

Mr Trump countered that Mr Biden, while supporting the 1994 crime bill, had referred to African Americans as “super predators”.

The Democrat denied saying such a thing. In 1993, while chairman of the Senate Judiciary Committee, Mr Biden warned of “predators on our streets” who were “beyond the pale”.

Mr Trump also said: “You can’t even say the word ‘law enforcement’ because if you did say those words you would lose all of your radical left supporters.”

What did they say about coronavirus?

Due to the pandemic, the debate at Case Western Reserve University had a small, socially distanced audience and the traditional opening handshake was skipped.

Mr Biden rubbished Trump’s leadership on the coronavirus pandemic, which has killed more than 200,000 Americans.

“He panicked or he looked at the stock market,” the Democrat said of the president, who wants states to reopen their economies.

“A lot of people died and a lot more are going to die unless he gets a lot smarter, a lot quicker,” Mr Biden said.

Local rules required everyone in the room to wear masks, but of the president’s family members present only US First Lady Melania Trump donned a face covering during the debate.

In a debate that was the political equivalent of a food fight, the winner is the man who emerged least covered in slop.

On Tuesday night, that man was Joe Biden – if only because his main goal was to prove to Americans that he could hold up under pressure, that he had not lost a step due to his advancing age. He had to show he could take a pie to the face, metaphorically speaking, and keep his cool.

He mostly met that standard, although it was at least in part because Donald Trump, by his constant hectoring and interruptions, seldom gave the former vice-president a chance to say something truly damaging to his own cause.

Twitter Trump – the unconventional, bombastic, insulting and rumour-mongering aspect of this president – was on full display throughout the hour and a half event. Unfortunately for the president, many Americans, even his own supporters, find his social media persona one of his more unattractive attributes.

Trump needed this debate to shake up a race that is tilting against him – and has been remarkably stable, through economic, health and social adversity.

Nothing about this hour-and-a-half free-for-all seems likely to alter the dynamics of this contest or change the minds of the one in 10 American voters who say they are still undecided (although perhaps they’ll resolve never to watch another one of these).

Anything resembling a substantive exchange was buried in a cavalcade of bloviation and bickering – and because of this, it was a missed opportunity for the president.

What other insults were exchanged?

As the two tussled over healthcare, Mr Trump, a Republican, accused his rival of being beholden to socialists in his party, saying: “They’re going to dominate you, Joe, you know that.”

Mr Biden went on: “Everybody knows he’s a liar.”

The president then defended his effort to swiftly fill a US Supreme Court seat to cement a 6-3 conservative majority on the bench.

Mr Trump challenged his rival to say whether he would pack America’s highest court, adding more justices to tilt its ideological balance, as some Democrats have urged.

The president also demanded Mr Biden release a list of his own judicial nominees.

But Mr Biden would not be drawn. “Will you shut up, man?” the Democrat snapped.

At another point, Mr Biden said: “It’s hard to get any word in with this clown. Excuse me, this person.”

He also called the president “Putin’s puppy” in a reference to Russia’s president.

How did their families come into the debate?

The feistiest clashes unfolded when the candidates brought up their families.

Mr Biden referred to claims by anonymous sources that Mr Trump had once called members of the military “losers”, a report denied by the president and a number of his former and current aides.

The Democrat spoke of his late son, Beau, who served in Iraq.

“He was not a loser, he was a patriot!” said Mr Biden angrily.

Mr Trump brought up the Democrat’s other son: “Really? Are you talking about Hunter?”

“I’m talking about my son, Beau Biden!” said the Democrat.

“I don’t know Beau,” said Mr Trump. “I know Hunter. Hunter got thrown out of the military. He was thrown out, dishonourably discharged for cocaine use. And he didn’t have a job until you became vice-president.

Why is the moderator being criticised?

It was Mr Wallace’s second time moderating a presidential debate and he at times struggled to rein in the quarrelling rivals.

At one point he urged the president to stop his interruptions.

The Fox News host said: “I think that the country would be better served if we allowed both people to speak with fewer interruptions. I’m appealing to you, sir, to do that.”

Mr Trump interjected: “But he does plenty.”