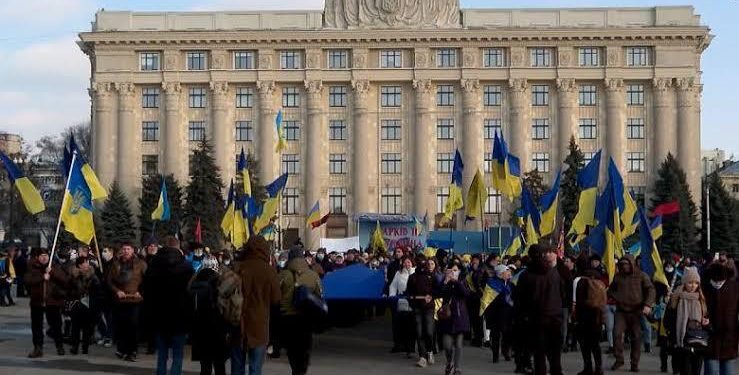 As world leaders scramble to find a diplomatic solution over the ongoing Russia-Ukraine tensions, talk has turned to the 2015 Minsk Agreement as a possible way out of the crisis.

The agreement, the second of its kind (and the one that matters), was hammered out in the Belarusian capital in a bid to end what was then a bloody 10-month conflict in eastern Ukraine.
But Minsk II has never been fully implemented, with its key issues still unresolved. Here’s what you need to know:

Who are the key players?

A rare meeting between Russian, Ukrainian, German and French leaders in February 2015 sought to bring peace to areas of Ukraine that had been taken over by pro-Russian separatists the year before. Those areas, in Ukraine’s Donbas region, became known as the Luhansk People’s Republic (LPR) and the Donetsk People’s Republic (DPR). The Ukrainian government in Kyiv asserted the two regions were in effect Russian-occupied.

The talks also aimed to work towards a political settlement for the region.
The result, Minsk II, was signed by representatives of Russia, Ukraine, the separatist leaders and the Organization for Security and Co-operation in Europe (OSCE). It was subsequently endorsed by a UN Security Council resolution.

What were the conditions of the agreement?

A ceasefire. In February 2015, there was still heavy fighting in some areas between Ukrainian forces and Russian-supported rebels, with the Ukrainians taking heavy losses.
The withdrawal of heavy weaponry from the frontlines.
That the OSCE — a 57-member security organization that also includes the US and Canada — monitor the frontlines.

A dialogue on local elections in areas occupied by pro-Russian rebels.
The restoration of full economic and social links between the two sides, so that, for example, pensions could be paid.
That Ukrainian government control be restored over the border with Russia.
The withdrawal of all foreign forces and mercenaries.
Constitutional reform that would provide some autonomy to the regions of Ukraine’s eastern Donbas region no longer under the central government’s control.

What happened after Minsk II was signed?

The worst of the fighting stopped, and OSCE monitors moved in. To this day, the OSCE patrols the frontlines and reports ceasefire violations along the border. However, there is much less fighting and fewer casualties than in 2014-15. From that perspective, the agreement was, at least, partly fulfilled.
Still, there are 1.5 million internally displaced people in Ukraine, and nearly 14,000 people have died in the conflict.

But there’s a catch

The Minsk Agreement was devised very hastily. Russia was a signatory but its role in the conflict was not acknowledged. Indeed the word ‘Russia’ does not appear anywhere in the text. Ever since, that’s allowed the Kremlin to say that it is merely an observer and that agreement must be reached between the Ukrainian government and the rebels in the country’s east — despite evidence showing that Russia supports the separatists. Kyiv, meanwhile, refuses to talk directly to the rebels.
In addition, the agreement’s language is imprecise — with Russia and Ukraine interpreting its political roadmap to mean very different things.

Ukraine wants first to regain control of its international border before local elections are held in rebel-held areas. It also wants Russian forces (point 7 above) to leave. Russia, of course, says it doesn’t have any forces in the rebel-controlled areas.
Moscow wants elections while the region is still under the control of the separatists — and before Ukrainian authorities regain control over the border.
Efforts by Western diplomats to square this circle have gone nowhere.

What are the other issues?

The status of the rebel-held areas of the Donbas have never been defined (point 8 above).
Kyiv’s view is that the region should have the same sort of autonomy as other Ukrainian regions do, within a federal structure.
Moscow points to language in the Minsk Agreement that refers to “the special status of certain areas of the Donetsk and Luhansk regions” and interprets that as allowing these regions to have their own police forces and judicial system, among other advantages.
But any Ukrainian government that agreed to giving the Donbas special status might not survive a public backlash. In 2015, then-Ukrainian President Petro Poroshenko put forward constitutional amendments on decentralization that were bitterly opposed by Ukrainian nationalist groups. Riots in Kyiv left three law enforcement officers dead.

Why does Vladimir Putin regard Minsk as so important?

If interpreted in Moscow’s favor, it’s potentially a way that Russia can retain its influence in Ukraine for and through pro-Russian groups in the Donbas.
It would give Russia the ability to control the territory — without annexing it, as they did with Crimea in 2014 — and a say in Ukraine’s national affairs.

Further complicating matters, Russia has issued passports to hundreds of thousands of residents of Donbas.
That could also give Russia a role in Ukraine’s parliament through its proxies — and the chance to derail any distant Ukrainian effort to join NATO or the European Union — a key demand that Russia says must be met to defuse current tensions. Depending on how elections were organized, people with Russian citizenship and those who have been granted amnesty for killing Ukrainians might conceivably end up in the Ukrainian parliament.
That would further destabilize Ukraine.

What do world leaders have to say?

French President Emmanuel Macron sees the Minsk Agreement as the most promising off-ramp to avert conflict, saying on Tuesday that “the shared determination [to put into effect the Minsk Accords] is the only way allowing us to construct peace and build a viable political solution.” He said that during his meetings he was able “to obtain a very clear and explicit commitment from Presidents Putin and [Volodymyr] Zelensky to commit themselves to the strict basis of the Minsk agreements,” but gave no further details.

US Secretary of State Antony Blinken said Monday that the United States and Ukraine are “united” in supporting the Minsk agreements as the way forward to resolve the conflict. But he also hinted that the agreement alone isn’t a one-stop solution, highlighting the challenges that the agreement presents.

“Minsk does not spell out some issues of sequencing when it comes to the steps that the parties need to take,” Blinken said, adding: “Ukraine’s been approaching this in good faith. We have not to date seen Russia do the same.”
Duncan Allan, associate fellow of the Russia and Eurasia Program at London’s Chatham House think tank, wrote that ultimately the argument about Minsk is this: “Is Ukraine sovereign, as Ukrainians insist, or should its sovereignty be limited, as Russia demands?”