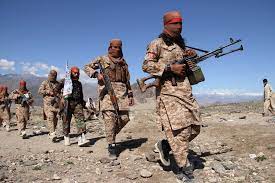 Witnesses CNN has spoken with at Hamid Karzai International Airport in Kabul say they have heard many gunshots fired throughout the day.

It’s unclear if the shots were fired at people or just into the air to disperse crowds, or by whom, the witnesses said.

In addition to the perimeter set up by US forces inside the airport, there is a Taliban presence on the approaches to the airport, according to the witnesses.

There are thousands of Afghans with their families waiting in and around the airport, hoping to board flights out of the country, they added.

One of the witnesses CNN spoke with was hoping to get on a flight out of Afghanistan, fearing persecution at the hands of the Taliban when the Americans leave. At one point, the witness managed to get inside the airport, where they saw US soldiers telling Afghans to “stay back”. “The US need to take us with them. Once they’re gone, we will be left behind forever,” the witness said.

The witness came back outside the airport to try and pick up their family, but were prevented from going in again by the Taliban.