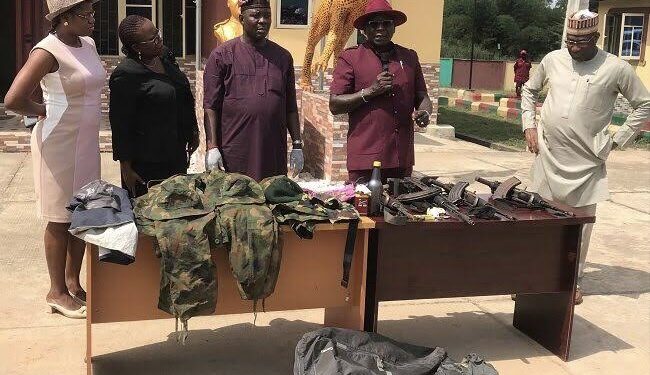 Operatives of South-West security outfit,  codenamed Amotekun on Monday in Ibadan, Oyo State capital, displayed at least four AK-47 and 49 rifles, over 50 7.2 mm special ammunition, military uniforms, illicit substances and other dangerous items recovered from kidnappers and other criminal elements in the state.

The items which also include lighters and a bottle of energy drink were recovered when the operatives busted a suspected hideout of suspected kidnappers terrorising motorists and members of the public.

The state Commandant of Amotekun Corps, Col. Olayinka Olayanju (rtd), in the company of the Special Adviser on Security Matters to Governor Seyi Makinde, CP Fatai Owoseni (rtd) briefed journalists and explained how the operatives in a joint operation with the local vigilantes recovered a bag containing the weapons.

Olayanju told newsmen that, “Four AK rifles comprise of Ak-49 and AK-47, over 50 7.2 mm special ammunition, military uniforms, illicit substances, fire lighters, a bottle of energy drink were recovered from a den suspected to be a criminal hideout for suspected kidnappers terrorizing motorists and innocent citizens of the state.”

The commandant said, “We started from Lagos-Ibadan expressway from Soka village just behind those private universities along Lagos Ibadan Expressway and we now extended it to Ogobomoso Axis and on Friday last week at about 7 o’clock we got an information that some armed men were sighted around Galilly area, and we decided to send some of our officers there with some vigilantes to see what is happening and to see if they can recognise their camp but unfortunately they see nobody there but they reported that they saw signs of human beings, things like cigarette buds, pure water sachets, biscuit and we asked them to search the area properly.

“At the end of their search they came up with a bag they recovered from a cave around the area, we asked them to bring it to office and when we checked the contents of the bag we saw it was guns, ammunition, military uniforms and illicit substances, fire lighters and a bottle of energy drink.

“These weapons are automatic type of weapons that are used by these criminals and these are Ak-45, Ak-47, 7.2mm special ammunition, these weapons can go as far as 600 meters and anything between here and 400 meters if it’s not distracted by any object, will kill anyone hit by the bullets.

“These are complete military camouflage, two are fully completed camouflage with shirts, caps and belts, this is a shirt and a beret and muffler, there is also a raincoat with a navy cap, the raincoat is also a navy colour and from experience the kidnappers uses these, we also have illicit substances such as Colorado and weeds, we also have in the bag two fire lighters.

“We decided to open the bag in your presence to see how far we’ve gone and we couldn’t have done all these without the support of our governor who gave us the go ahead to continue doing everything humanly possible to arrest those criminals elements and that is why we have the S.A security matters on ground here with us here this morning.”

In addition, Owoseni said that the police arrested some suspects in connection with kidnapping cases in the state and therefore noted that the bag and its content would be handed over to the police for further investigations.

Fuel Crisis Bites Harder in Lagos as Commuters, Students get Stranded due to Price Hike