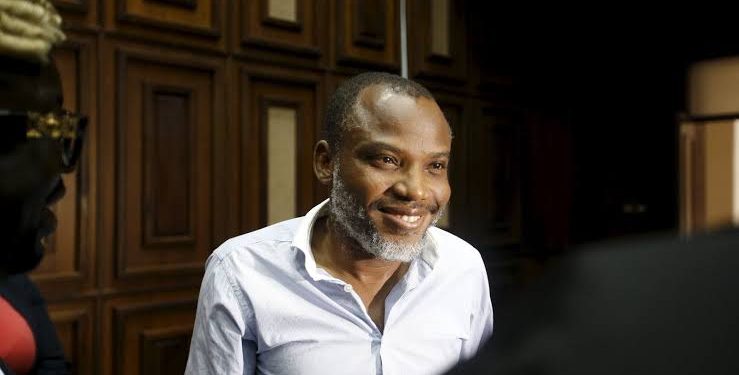 Justice Binta Nyako of the Federal High Court Abuja, yesterday, rescheduled the trial of detained leader of the Indigenous People of Biafra (IPOB), Nnamdi Kanu, from January 19, 2022, to January 18, 2022.

The shift in the trial date followed the abridgement of time granted by the judge following a passionate plea to that effect.

Counsel to Kanu, Ifeanyi Ejiofor, had approached the court with an application seeking an order of the court to accommodate the trial in November and December this year as against January 19 next year.

Shuaib Labaran, who represented the Federal Government, told the court that a counter affidavit through which the government opposed the request had been filled and served on Kanu.

Nyako, however, informed Kanu’s lawyer that the application for abridgement of time could not be considered, as there is no judicial time for such an issue.

In the drama that ensued, the case diary of the court was read to the lawyer to establish that the court has crowded cases to treat.

Following the insistence, Nyako agreed to shift other cases slated for January 18 to accommodate the trial, which would last till January 19 and 20, 2022.

She ordered the DSS to allow Kanu to practice his faith, change his clothes and be given the maximum possible comfort in detention.

But Ejiofor also sought to move another application challenging the seven-count treasonable felony charges the Federal Government brought against him.

Labaran, however, challenged the argument on the ground that the motion was not ripe for hearing and that the business of the day was the motion for abridgement of time after which Nyako agreed with Labaran and rejected the bid to bring the motion forward.

Meanwhile, Kanu was absent from court after he was scheduled for an emergency trial following the bail application of his October 26, 2021 re-arraignment on a seven-count charge bordering on treasonable felony and terrorism.

Indications that Kanu might not appear in court emerged when as early as 8:00 a.m., there was the scanty presence of security operatives, unlike other occasions when he appeared in court.

IN its reaction, the Human Rights Writers Association of Nigeria (HURIWA), said the Attorney General of the Federation and Minister of Justice, Abubakar Malami’s action showed that President Muhammadu Buhari was not willing to release Kanu.