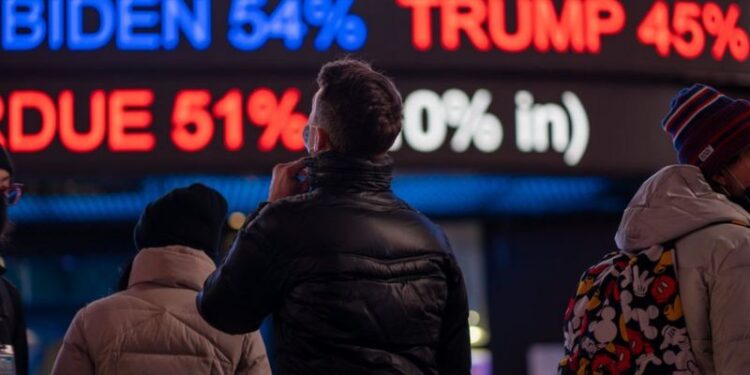 Okay, so who is going to be the next president?

We don’t know, because not enough votes have been counted yet for either Donald Trump or Joe Biden to have secured victory.

In fact, because of the time it will take to count the huge number of postal votes cast during this pandemic election, it could take days.

Several key states, including Arizona, Georgia and Michigan, are expected to project a winner at some point on Wednesday or Thursday. With results from these critical states – plus the others who projected winners late on Tuesday – we should have a clearer picture of the likely outcome.

But that’s not all. If there are legal challenges to the results – already threatened by Mr Trump – it might take weeks before a candidate can officially declare victory. This could get tricky.

It’s down to these states

A reminder – to become president you don’t actually need to win the popular vote. Instead, a candidate has to win the majority in a system called the electoral college, where each state gets a certain number of votes or “electors” roughly in proportion to its population. If you win a state, you win its votes (except Nebraska and Maine, but that’s complicated).

There are 538 of these state votes in total – the person who gets 270 will become president. So for both candidates, the road to the White House means a carefully plotted path through states that will get you to this magic number.

And, as per usual, it will all come down to a handful of key battleground states.

Mr Biden has just been projected to win Michigan. He also holds narrow – very narrow – leads in Nevada and Arizona, and CNN, CBS, Fox and the Associated Press have projected a win for him in Wisconsin.

If he’s able to hang on in all these states as final votes are counted, their combined 43 electoral votes from these states will get him to exactly 270. Additional wins in Pennsylvania or Georgia would give some cushion to the Democrat, and leave some room for error.

For Mr Trump, a path to the presidency will likely pass through Pennsylvania, with its 20 electoral votes. If he pulls off a win here, a win in at least three other remaining states – most likely in Georgia, North Carolina, Nevada or Arizona – could put him back in the White House.

But with voters left to count, and margins on a razor’s edge, this could all change.

Why is it so close?

For starters, it looks like polling data going into this week gave an incomplete picture.

Robert Cuffe, BBC’s head of statistics, says it’s still too early to say whether this election has been a pollster’s nightmare. But we do know that the national poll average did not appear to forecast the nail-biter we find ourselves in now. Final national polls showed Mr Biden leading Mr Trump by about eight points. In battleground states Mr Biden also polled in the lead, but by a much slimmer margin.

Voters’ priorities may have also been slightly misjudged. While the coronavirus pandemic has dominated headlines for most of this year, a survey conducted by Edison Research found that only one in five voters considered the virus the top issue influencing their vote. But many more – more than one third of all voters – said the economy was their key issue.

This view may have favoured Mr Trump – those who put the economy and jobs first leaned heavily toward the president.

The story in one line?

Donald Trump is doing better than expected and Joe Biden has failed to win those battleground states which count votes quickly, which means more uncertainty as we wait for a few key states.

And in their own words…

Joe Biden addressed supporters saying: “We’re going to win this” but also urged patience. Donald Trump said Republicans had won and falsely claimed fraud – as we know, votes are still being counted and there is no evidence of fraud.

With the presidency still hanging in the balance, we’re all on the edge of our seats. But while we wait, here are some other stories you may have missed: